The triennial General Assembly of the National Union of Somali Journalists (NUSOJ) has gotten off to a triumphant start this morning in Galkayo of Puntland State of Somalia with a cavalcade of welcome to delegates from all across Somalia. 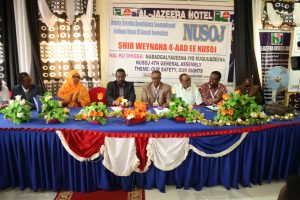 Running from 3rd to 4th July, the 4th General Assembly is the NUSOJ’s supreme decision making event, at which delegates elected by members from six union branches set the agenda for the next three years and elect its supreme council, executive committee, president, vice presidents and secretary general. 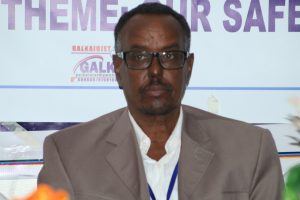 The General Assembly is an integral part of NUSOJ and the tool that ensures it is fully democratic and accountable. It brings together representatives of the journalists who keep the Somali people and outside informed. It gives union members a voice and the mandate to decide how the union will struggle, build and its members will campaign together for the next three years and beyond. 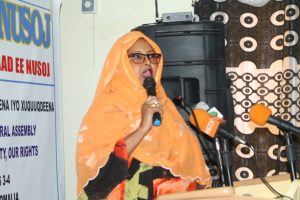 NUSOJ Supreme Council President Abdirisak Omar Ismail, speaking at the opening, explained: “The theme of this General Assembly is our safety and our rights. This is the place where our members through their union challenge lack of safety for our members and violations of our fundamental rights, take on oppressive forces, and show resilience.” 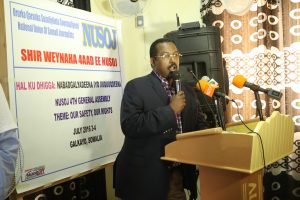 At the opening session, there was fighting talk from NUSOJ Secretary General Omar Faruk Osman who said: “Together we are the largest democratic force in the Somali media industry.” 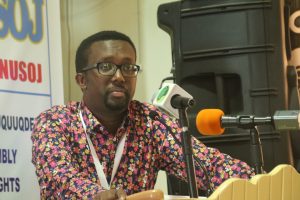 NUSOJ Secretary General explained “Holding the General Assembly in Puntland demonstrates how truly national we are and must continue to become a real reflection of the demographics and challenges of all NUSOJ members. The presence of the NUSOJ holding its highest decision making meeting here must be viewed as concrete expression of solidarity to our colleagues in Galkayo as this is the second most dangerous place in which to be a journalist in Somalia”.

Speaker after speaker delivered messages of protest, creativity and enthusiasm for the struggles ahead, which NUSOJ members will be recommitting their union as a campaigning and militant trade union.

“It must also be understood as a clear message to government authority that NUSOJ will not tolerate the blatant violation of human and trade union rights, including when government disbands our meeting through security forces. Thank you to our members in Puntland who stood up to host their colleagues from the rest of country without fear of disturbance or threat to their freedom of assembly in order to exercise internal democracy of their trade union” declared Osman. The triennial General Assembly of the National Union of Somali Journalists (NUSOJ) has gotten off to a triumphant start this morning in Galkayo of Puntland State […]
Do you like it?0
0 Read more Delegates from 140 countries voted on Friday, 10 June 2016, to elect Omar Faruk Osman, Secretary General of the National Union of Somali Journalists (NUSOJ), to […]
Do you like it?0
0 Read more The National Union of Somali Journalists (NUSOJ) is dismayed to learn the barbarous killing of female journalist, Sagal Salad Osman, who was shot to death on […]
Do you like it?0
0 Read more
Categories