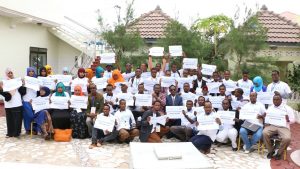 NUSOJ leaders, members and activists attending the 4th General Assembly of the National Union of Somali Journalists (NUSOJ) in Galkayo, Puntland, sent a strong message to anti-trade union forces, inside and outside Somalia, in defence of a free and independent NUSOJ. 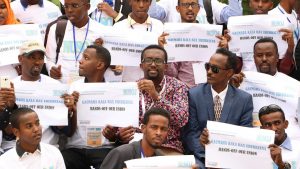 The 66 delegates. representing journalists members of the union from all over Somalia, stood shoulder to shoulder to deliver a defiant warning to the country’s government and media owners/employers: “Hands off our union”. 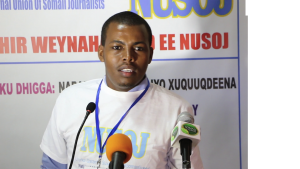 “I’m standing for the independence of my union” said Khadar Awl Ismail, a journalist working for Radio Ergo in Bohotle, the capital of the northern Ayn region. “Because I want to tell our government and employers that they must stop undermining our union and harassing our chosen representatives. Trade union rights are human rights and we will never stop fighting for them.” 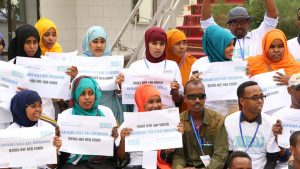 Representatives of NUSOJ’s six branches from all over the country vowed to intensify their commitment to fight back, and preserve their freedom of association, freedom of assembly and freedom of expression.

Delegates adopted unanimously a resolution condemning those working with oppressive authorities within the Federal Government of Somalia in order to thwart independent trade unionism, suppress independent practice of journalism and overthrow elected leaders.

NUSOJ has for many years been resisting government officials, such as in the ministries of information and labour, interfering in the union’s affairs and attempting to impose its leaders. NUSOJ general assembly could not be held last February after security forces, acting on the orders of the Ministry of Information, stopped it from taking place. This time, however, the Puntland government allowed the General Assembly to take place in its territory, in line with article 20 of provisional constitution of Somalia, which guaranteed freedom of assembly without prior approval.

Last November, the International Labour Organisation (ILO)’s Governing Body endorsed the findings of a report concluding gross violations of the right to freedom of association and interference in internal union affairs, arbitrary interrogation of and travel restrictions on NUSOJ leaders by officials of the Government of Somalia. LINK: http://www.ilo.org/wcmsp5/groups/public/—ed_norm/—relconf/documents/meetingdocument/wcms_424082.pdf

Last May, four United Nations human rights experts, Bahame Tom Mukirya Nyanduga, Maina Kiai, David Kaye and Michel Forst, urged the Government of Somalia to end the continuous acts of intimidation and reprisals against members and leaders of two Somali trade unions, including NUSOJ, and to stop interfering in the unions’ internal affairs and activities.

“Somalia is not fulfilling its international human rights obligations and the situation for trade unions keeps on worsening despite specific recommendations made by the ILO (…) urging the Somali Government to refrain from any further interference in the unions registered in Somalia, with particular reference to NUSOJ,” the rights experts said. LINK:http://www.ohchr.org/EN/NewsEvents/Pages/DisplayNews.aspx?NewsID=19924&LangID=E