Somali authorities have failed to successfully prosecute 92 percent of the cases of journalists murdered, revealed a new report, “Unseating Impunity: Justice for Somali Journalists”, released today by the National Union of Somali Journalists (NUSOJ). Lack of political will to combat impunity and institutional capacity challenges of the criminal justice system hamper efforts to obtain justice for journalists who have been victims of violent crime, added the report.

“Thirty–eight (38) journalists have been murdered in Somalia since 2012, in near–total impunity. 24 journalists were wounded in this four years. The month of September 2012, when the country’s last Federal Government was formed and President Hassan Sheikh Mohamud elected, saw the killings of seven journalists, and became the single deadliest month for journalists in the history of Somalia. The year 2012 was also the deadliest with 18 journalists murdered” said the report.

“In light of the prevalent impunity for the high level of violence and repression against journalists, the federal government had squandered an opportunity to tackle impunity in the past four years. Rather it had been busy attacking journalists and denying their fundamental rights,” said NUSOJ Secretary General Omar Faruk Osman. “Yet the current government has full responsibility for tackling impunity enjoyed by government officials. The government should start with robust prosecutions against those who are in government and believed to have committed rights abuses against journalists”. 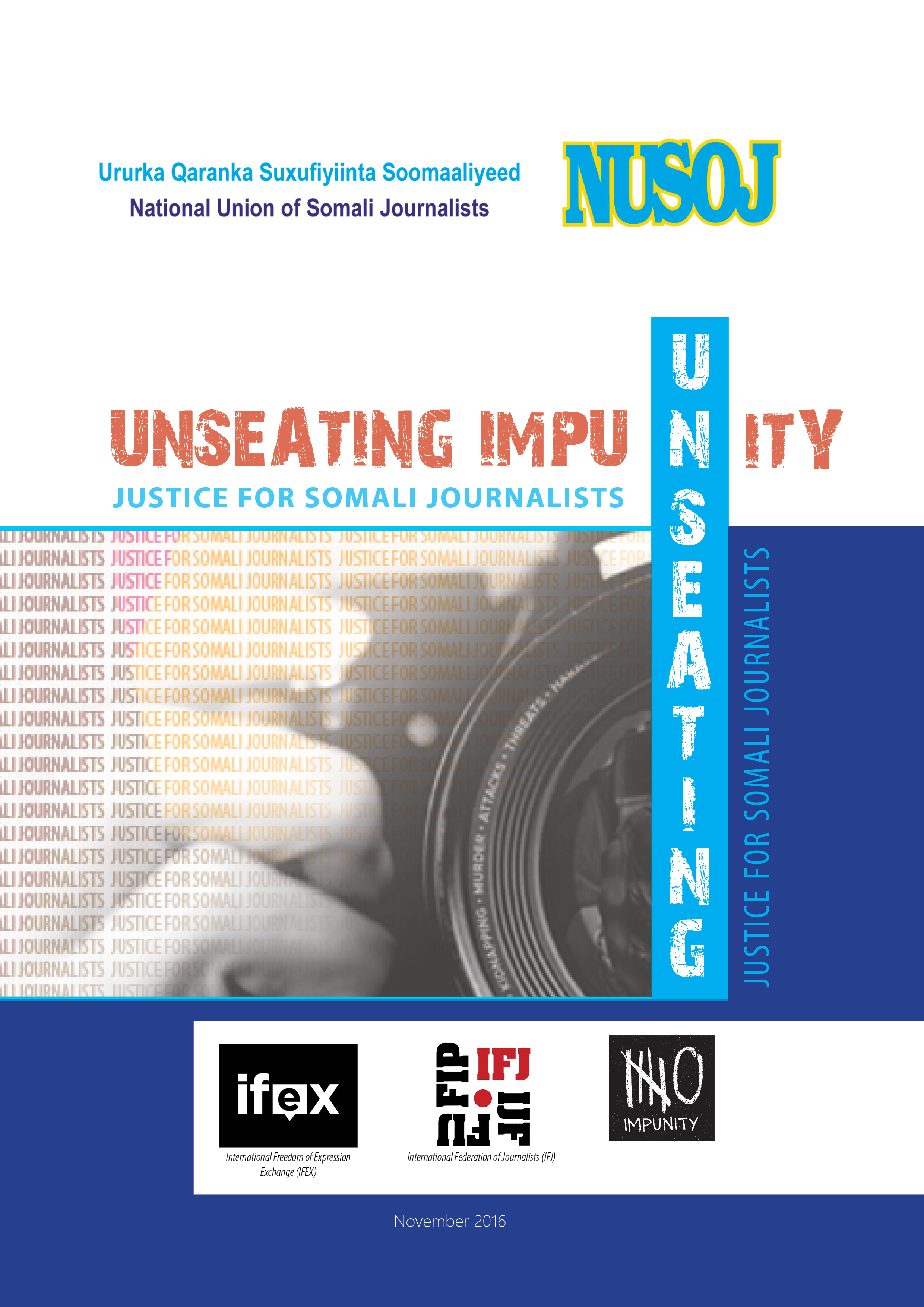 The groundbreaking report finds that “there is ample evidence to show that the killings of journalists are well planned, politically–motivated and, in most cases, punish journalists for their media work. While Al–Shabaab is responsible for some of these crimes, there are other forces at work trying to eliminate journalists.”

“When a journalist is killed, leaders in government are always quick in issuing statements condemning the killings and offering condolences. However, this is not followed by effective and credible investigations. Usually there is no information made available about ongoing investigations, let alone about anyone arrested and charged, except if it is an Al–Shabaab fighter caught by security forces” stressed the report.

The report finds out the current state of impunity continues to intensify thanks to the Federal Government’s lack of consistent response to all serious crimes committed against journalists, although some effort is made to prosecute Al–Shabaab members who were accused of killings journalists, some sentenced to death and executed by firing squad. “The Federal Government’s repeated failure to act against crimes committed against journalists has created a crisis of impunity. By permitting a climate of impunity, Somalia has failed to meet its obligations under international human rights law” the report detailed.

The report points out that “Somalia’s legal system rarely promotes justice for victims of these attacks and has in place no known measures to protect journalists–something that demotivates victims of rights abuses from coming forward to assert their rights against the known perpetrators. No attempt is made to pursue complaints and assert rights because journalists know very well that no action will be taken against a perpetrator unless he is an Al–Shabaab fighter, and on the whole, keep silent.”

One of the results of the existing impunity is self–censorship. Often invisible, self–censorship constrains and decreases the free flow of information and opinion. This rising trend is an understated, incipient force that suffocates the work of journalists who operate under the constant stress of knowing that publishing or broadcasting a story may place them in very serious danger.

“Whenever a government official is involved, directly or indirectly, in an attack on a journalist, relevant authorities are naturally unwilling to investigate the crimes. Unavoidably, there is delay and inaction, when it falls to the same authority to investigate and prosecute the crime against journalist” the report underlined.

“Our firm and unswerving duty as a union of journalists is to demand for an urgent and full investigations into the murders of journalists, as well as into the other acts of violence, threats and attacks against journalists, their media houses and offices, and for all those responsible, be they State or None-State actors, to be brought to justice and punished for their crimes” declared Osman.