The National Union of Somali Journalists (NUSOJ) fourth General Assembly in Galkayo, Puntland, has been hailed as the best ever at its closing ceremony yesterday evening.

Some 84 participants, including 66 delegates, from 6 union branches in 12 regions attended the event, which began on 3 July and which determined the policies of NUSOJ for the next three years.

NUSOJ Secretary General Omar Faruk Osman commented: “There’s never been a bigger or more successful NUSOJ general assembly. We couldn’t have done it without you – our branch and members in Puntland. These last two days have been filled with opportunities to come together, learn from each other, and forge new paths for the future.” 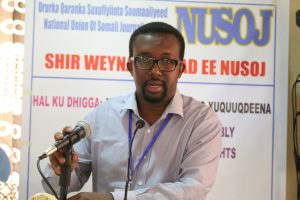 “In this general assembly we have detected a groundswell of support for a reinvigoration of activism – not just in the media and trade union movement but across the wider civil society,” said NUSOJ Secretary General told Delegates at the closing ceremony.

He concluded “As directed by this statutory General Assembly we all understand just how interconnected we all are and how powerful that can make us if we work hard together and build on the solidarity between female and male member journalists. So we let you, brave men and women of this union, know that your fight is not in vain, that we are part of something much bigger, we all belong to a campaigning union,” he said.

One of the key focuses of the General Assembly was intensifying union’s campaign to improve working conditions of journalists as journalists and other media workers across the country continue to struggle for better rights and conditions.

“Our leadership wants to work with all of you, members, to continue the incredible momentum we have built together, to seize this power to continue building a stronger NUSOJ, a smarter NUSOJ, a NUSOJ that continues to improve the lives of millions across the country and fearlessly defend media freedom” said Abdirisak Omar Ismail, President of NUSOJ Supreme Council.

“Our message to the federal government is to learn a lesson from this. They unlawfully denied us to meet in Mogadishu. But they cannot take away our commitment and resolve to enjoy our right to freedom of assembly in the rest of our country because Somalia is bigger than Mogadishu. No authority can stop the will of the members of this union,” declared Ismail.