61 journalists have been killed in the line of duty in Somalia since June 2006 and 58 of them were deliberately targeted and murdered because of their work. Despite this troubling repetition of events, proper investigations into these deaths and justice for those responsible are not forthcoming.

In 2015, this trend of increasing danger has shown no signs of abating; violence against journalists continues, unchecked and unpunished. So far this year five journalists were killed in the country. For every journalist who has been deliberately targeted and killed, there are many others who have been wounded, endangered and coerced into silence.

Journalists were mostly killed in Mogadishu and Galkayo stands out the second most dangerous place for journalists in Somalia. Mogadishu remains the worst place in the country for impunity. The perpetrators of violence against journalists and media workers enjoy almost absolute impunity in Somalia.

Speaking at Mogadishu’s commemoration, NUSOJ Secretary General Omar Faruk Osman said “although many security and professional challenges face Somali journalists, we must not deviate from our indispensable aim: to fight against impunity for the crimes committed against journalists, including those committed against our colleagues who were murdered, and to give a voice to the victims and their families”.

“To this end, at the union level, we shall continue to demand accountability and the federal government to uphold its obligations to independently and impartiality investigate and prosecute those most responsible for crimes against journalists,” added Osman.

“By killing a journalist and enjoying impunity, the Somali people are robbed of an informed, unified voice with which to speak out against injustices committed against them as a whole” declared NUSOJ Secretary General. 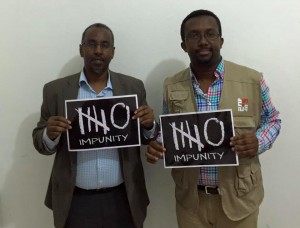