News Ticker
Notice: Trying to get property 'post_excerpt' of non-object in /home/sites/nusoj.org/public_html/wp-content/themes/mh-magazine/includes/mh-custom-functions.php on line 364
5 December 2014 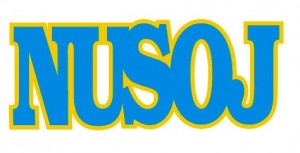 The National Union of Somali Journalists (NUSOJ) today condemned the killing of two journalists who died in a double suicide bombings in Baidoa town of Bay region in south-western Somalia. Three journalists were also wounded in this attack.

Mohamed Isaq Mogow Bariyow (nicknamed Madkey), who was working for Kalsan TV and baidoanews.com as reporter and cameraman, and Abdulkadir Ahmed Mayow (nicknamed Maaynot), reporter of Radio Baidoa and Somali Chanel TV, were among 20 civilian people who were killed in the suicide bombings.

“Once again indiscriminate terrorist violence has claimed journalists’ life and that of innocent civilians,” said Omar Faruk Osman, NUSOJ Secretary General. “We condemn this attack in the strongest possible terms – too often, extreme violence is claiming the lives of working journalists”.

The explosions happened near Dahabshiil Money Transfer Office in Baidoa after a teenager reportedly suicided first and was followed by explosion of a car with explosive devices which targeted people escaping from first suicide.

NUSOJ sends its condolences to the families and colleagues of Mohamed Isaq Mogow Bariyow, 25, and Abdulqadir Ahmed Mayow, 27, whose deaths are another horrific loss to Somalia’s media community. The union also sends its best wishes to three wounded journalists for as speedy a recovery as is possible, given the extent of their injuries.

“The deaths of journalists Bariyow and Mayow are the latest tragic reminders that the terrorist violence in our country poses a grave threat to all journalists working in different regions,” added Osman.

The spokesperson of Al-Shabaab in Bay region contacted journalists in Baidoa and claimed the responsibility of this brutal attack, saying the first suicide bomber was a 13-year old boy.

With the tragic murder of Mohamed Isaq Mogow Bariyow and Abdulqadir Ahmed Mayow, five journalists were so far killed in Somalia in this year.