The freedom and safety of journalists in Somalia have come under heavy siege in the year 2017 as the campaign to criminalise journalism intensified, with four journalists murdered in four months, 12 journalists wounded and 22 journalists arrested. 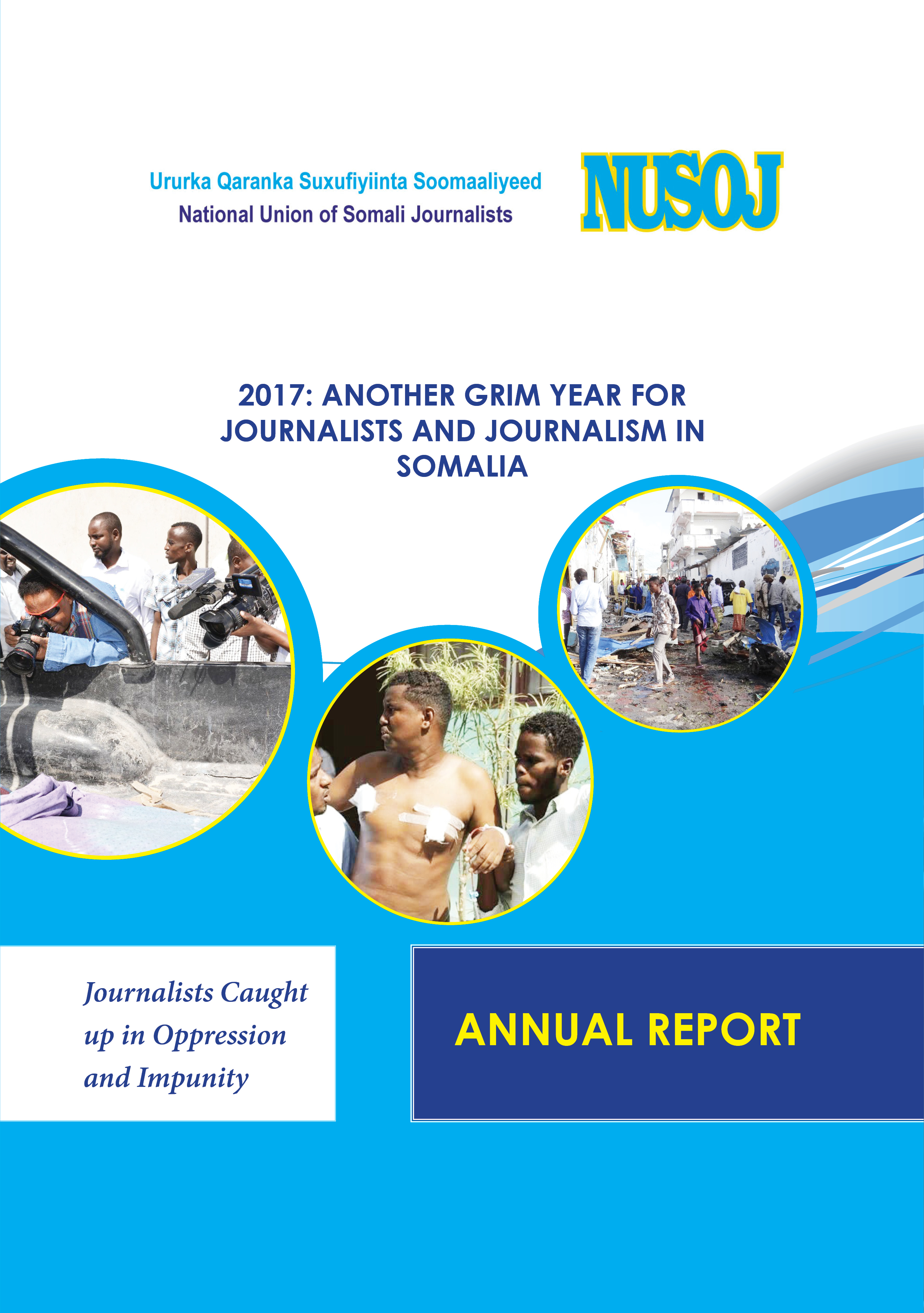 The National Union of Somali Journalists (NUSOJ) is marking World Press Freedom Day on 3 May 2018 with launch of its flagship annual report on State of Press Freedom in Somalia, and renewed its urgent appeal to the Federal Government, Federal Member States, Somaliland and armed none-State Actor to stop infringing journalists’ rights and to respect the fundamental principles of freedom of press.

Press freedom violations continued in Somalia undiminished, with the NUSOJ recording a range of sophisticated measures that was used to curb journalists’ freedom and oppressive practices against journalists diversified, accroding to the report, which states that the last four months of the year were particularly bloody, considering that no journalist was killed during the first eight months. Three of the four killed journalists died in bomb blasts planned to take away innocent lives, and the country’s capital Mogadishu once again emerged as a deadly city for journalists.

The report, entitled “2017: another grim year for journalists and journalism in Somalia“,  makes obvious multiple pressures including the use of intimidation and detention based on false allegations, self-censorship, propaganda and suppression of the truth have been the major features of the onslaught on the rights and freedoms of the media in 2017.

Mogadishu has continued to experience the worst press freedom violations, with journalists being killed and arrested. Journalists in other regions continued to face arrests and illegal detentions whereas some were beaten up and others openly threatened with extrajudicial punishments in most major cities such as Kismayo, Beledweyne, Garowe, Hargeisa, Baidoa and Las Anod.  Somali journalists have been resorting to self-censorship to protect themselves.

Press freedom is further undermined by media workers’ poor social conditions, says NUSOJ’s report, which reveals that “journalists are exposed to alarming threats and harm, making journalism a very dangerous profession that is ventured into mostly by the young and inexperienced.”

The Federal Government, Federal Member States, Somaliland and armed groups have all perpetrated shocking violations of media freedom. These predators often accuse journalists and media outlets of producing biased, slanderous and inflammatory reports and of deliberately stirring up violence.

“We are deeply disturbed by these repeated violations of press freedom and the permanent risks facing journalists in the course of their work,” said Omar Faruk Osman, NUSOJ Secretary General. “We urge the Somali authorities, both at federal and state levels, to end the culture of targeting journalists and media personel with impunity”.

“Violations of journalists’ fundamental rights are now routine in Somalia”, he said. “No predator was punished for any crime against journalists and this impunity is the main enemy of press freedom in Somalia,” he added.

NUSOJ has also found that the private interests of several media owners have tainted the reputations of some media outlets, as a conflict of interest has undermined editorial independence, hindering free and fair reporting and exposing journalists to risk. In general journalists working conditions in Somalia are poor.